On November 3, 2019, nine athletes laced up their sneakers, tied on their race numbers, and prepared to make history as the first team to run in the TCS New York City Marathon on behalf of the National Hemophilia Foundation (NHF).

The team: Soumar Arzouni, Emily Carr, Dawn Evans, Nicole Kaes, Jessica Ciccolella-Kahl, Renee DeRider, Garrett Hayes, Jennifer Hunt, Michelle Fleming, Carey Lindsey, Lizette Mishiev, and Carla Wells, came from across the United States—from as far as Texas and as close as Brooklyn, NY—to raise money and inspiration for people with bleeding disorders. Together, the team raised more than $40,000, which will be used to support the programs and services of NHF. (Out of the 12 team members, nine ran the marathon, but all raised money for NHF.)

Other team members, like Soumar Arzouni from Silver Springs, MD, have a professional connection: Sourmar works as a pharmacist for BriovaRX Infusion Services. She had never done any distance running before, and was nervous about the race, but was determined to support the community she interacts with every day through her work. “I work with hemophilia patients every day, so this cause is very close to my heart.”

“The incredible effort that the Red Tie Runners put into this race is truly inspiring,” said NHF CEO Val D. Bias. “They capture the spirit of the bleeding disorders community in their strength and perseverance.” 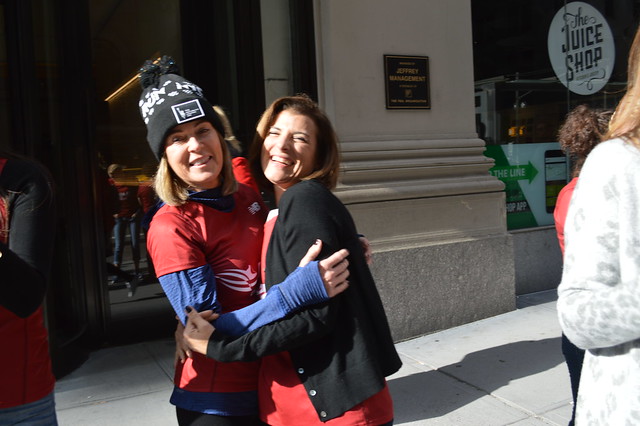