An overview of symptoms and treatments to help you understand VWD.

How many people in the US have VWD?

According to the Centers for Disease Control and Prevention (CDC)

What is von Willebrand Disease?

Von Willebrand disease (VWD) is an inheritable bleeding disorder. Many different proteins are needed to make a person’s blood clot successfully. People with VWD are either missing or low in the clotting protein von Willebrand factor (VWF) – or it doesn’t work as it’s supposed to. For a person to make a successful clot, VWF binds to factor VIII (8), another clotting protein, and platelets in blood vessel walls. This process will help form a platelet plug during the clotting process. People with VWD are not able to form this platelet plug, or it will take longer to form. The condition is named after Finnish physician Erik von Willebrand, who first described it in the 1920s.

VWD is the most common bleeding disorder, affecting up to 1% of the US population – or approximately 1 in every 100 people. It occurs equally in men and women. However, women may be more symptomatic due to heavy menstrual bleeding (periods). VWD occurs equally across all races and ethnicities.

The guidelines for VWD were updated in 2021. Click here to read the guidelines in full, or scroll to the bottom of this page for more information.

What are the Symptoms of VWD?

The main symptoms of VWD are:

What are heavy periods? Learn more.Find out if you have symptoms of VWD.

What are the Types of VWD?

There are three main types of VWD. A fourth type, acquired VWD, is not hereditary.

Find out if you have symptoms of VWD.

How is VWD Diagnosed?

A combination of blood tests are used to diagnose VWD, including a VWF antigen test, which measures the amount of VWF in the blood, tests that measure clotting time and ability to form a clot, and tests measuring platelet function. Some of these tests may have to be repeated, because the levels of VWF can change due to stress, exercise, the use of birth control pills, pregnancy, and hyperthyroidism. People with VWD usually have less than 50% of normal VWF in their blood. After a diagnosis of VWD is discovered, an additional is given to determine the type. The best place for patients with bleeding disorders to be diagnosed and treated is at one of the federally funded hemophilia treatment centers (HTCs) that are spread throughout the country. HTCs provide comprehensive care from skilled hematologists and other professional staff, including nurses, physical therapists, social workers and sometimes dentists, dieticians and other healthcare providers. In addition, HTCs often have specialized labs that can run more accurate VWD testing.

Learn more about to prepare for a VWD test.

How is VWD Treated?

Treatment for VWD depends on the diagnosis and severity. Some bleeds are mild enough not to require treatment at all.

Learn about treatment options for VWD.

NEW VWD Guidelines: What You Need To Know

New VWD Guidelines for the diagnosis and management of von Willebrand disease were released in January 2021. These updated guidelines are the result of a collaborative effort between the American Society of Hematology (ASH), the International Society on Thrombosis and Hemostatsis (ISTH), the National Hemophilia Foundation (NHF), and the World Federation for Hemophilia (WFH). The following one-page snapshots offer a summary of these guidelines and will provide you with the most important and up-to-date information. Click here to read the updated guidelines in full.

Questions? Reach out to handi@hemophilia.org. 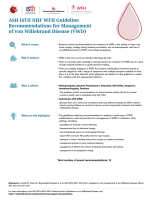 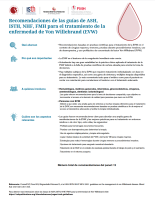 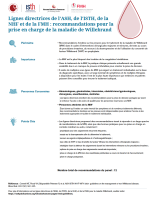 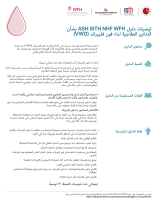 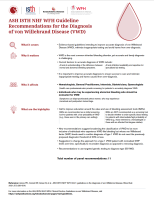 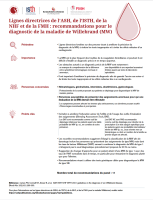 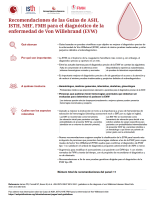 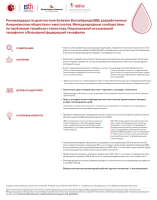 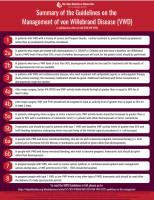 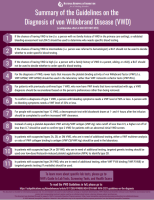